The Arboretum can be found in the centre of England on Croxall Road, Alrewas in Staffordshire. It is easy to reach and is close to all the Midlands motorways.

Arriving by car or motorcycle

If you are using a Sat Nav to find us, please use our postcode DE13 7AR.

The Arboretum is located just off the A38/ A513 between Lichfield and Burton upon Trent. You can follow the local brown signs to find us.

We are unable to provide lockers where motorcycle helmets can be stored. 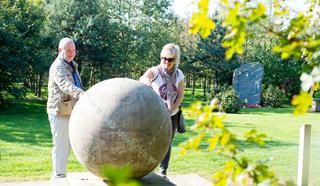 We have two large car parks, one next to our Remembrance Centre and the other around 300 metres, on the left, past the entrance to the Arboretum on Croxall Road.

Wider blue badge and family friendly spaces, available on a first-come-first served basis, can be found near to the Remembrance Centre. A drop-off/pick-up area is located next to our entrance.

A parking charge applies to all cars, including blue badge holders. Parking is charged at £4 for vehicles that have booked in advance, or £6 on the day. For everyone's comfort we are limiting the numbers in our buildings and grounds and recommend booking your parking tickets in advance to guarantee entry.

On special event days additional park and ride arrangements may be put in place.

Lichfield Trent Valley is the closest railway station and is five miles away. Lichfield City, although further away, is located close to the bus station and provides better public transport links.

Many of our visitors prefer to book a taxi directly from either train station to complete their journey to us:

Although we do not have an on site bus stop, a daily bus service (number 812) operates between Burton upon Trent and Lichfield. The closest stops can be found in Alrewas Village (roughly a 20 – 30 minute walk away).

A suggested route for those wishing to travel by bus is:

Take the 812 bus for around 30 minutes before leaving the vehicle at Wellfield Road, Alrewas, outside of the Alrewas Royal British Legion building.

With The Royal British Legion on your right, walk up the footpath next to the slip road and over the A38.  Having crossed the slip road, take a left and walk downhill alongside the A38 slip road on the footpath. Continue walking until you are opposite the petrol station (on the opposite side of the A38 carriageway). Take the right onto Croxall Road. Continue walking, over the railway line, along Croxall Road. You will find the Arboretum on the left after around a 1/3 mile.

National cycle route 54 runs from Lichfield to Burton on Trent through Alrewas village.

We are unable to provide lockers where cycling equipment can be stored.

If you are using a Sat Nav to find us, please use our postcode DE13 7AR.

The Arboretum is located just off the A38/ A513 between Lichfield and Burton upon Trent. You can follow the local brown signs to find us.

We ask that coach / mini bus drivers confirm their arrival times with the Arboretum in advance of their visit, you can do this by calling 01283 245 100. Upon arrival on site, unless otherwise directed, please use the drop-off/pick-up area outside of the Remembrance Centre. Coach parking is free and a member of our team will advise you where to park.

Complimentary refreshment vouchers are provided to the drivers of pre-booked groups.

Find out more about visiting us as a group and the packages and services we can offer on our group visit pages.

Arriving by canal boat
The Arboretum is only a few miles from the Trent and Mersey Canal which passes through Alrewas village. It’s around a 40-minute walk from the canal to the Arboretum via bridges, 46,47 or 48.

To help plan your arrival, download our directions here.

There are cycle racks located next to our Remembrance Centre for visitors who arrive by bicycle.