The Falklands Conflict started on 2 April 1982 and was the first military action since the Second World War that utilised all elements of the Armed Forces.

The conflict lasted 74 days, during which seven ships were lost to enemy action, nine aircraft were shot down, and 255 British personnel lost their lives. Their names are all inscribed on the Armed Forces Memorial at the Arboretum.

In this anniversary year, visitors to the Arboretum can learn more about the conflict, take part in acts of Remembrance and hear stories from those who were there. Take a look below at just some of our Falklands 40 activities taking place throughout the year. 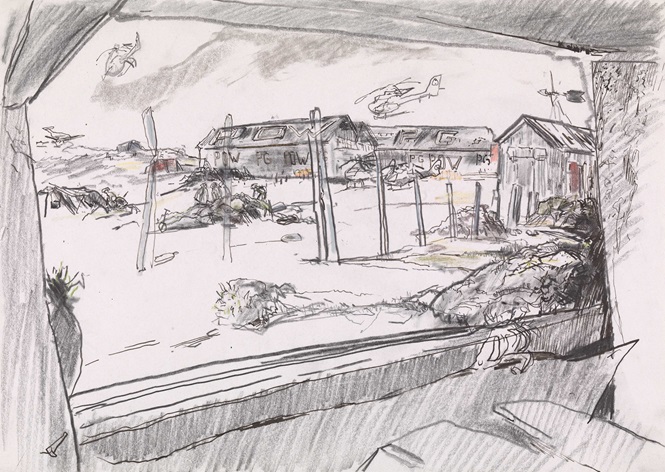 Falklands 40: Sketches from the Frontline

Linda Kitson was commissioned by the Imperial War Museum to be the official war artist for the Falklands War. Displayed at the Arboretum forty years later, her vivid drawings provide a unique window into the experience of those who fought on the front line, reminding us of the sacrifice that they made.
Click Here

On the 2 April 1982, Argentine forces invaded the British overseas territory of the Falkland Islands, sparking one of the largest major conflicts since World War II. The conflict lasted 74 days and 255 British personnel lost their lives. Forty years on, this guided walk will tell the stories of those who served as part of the Falklands taskforce. 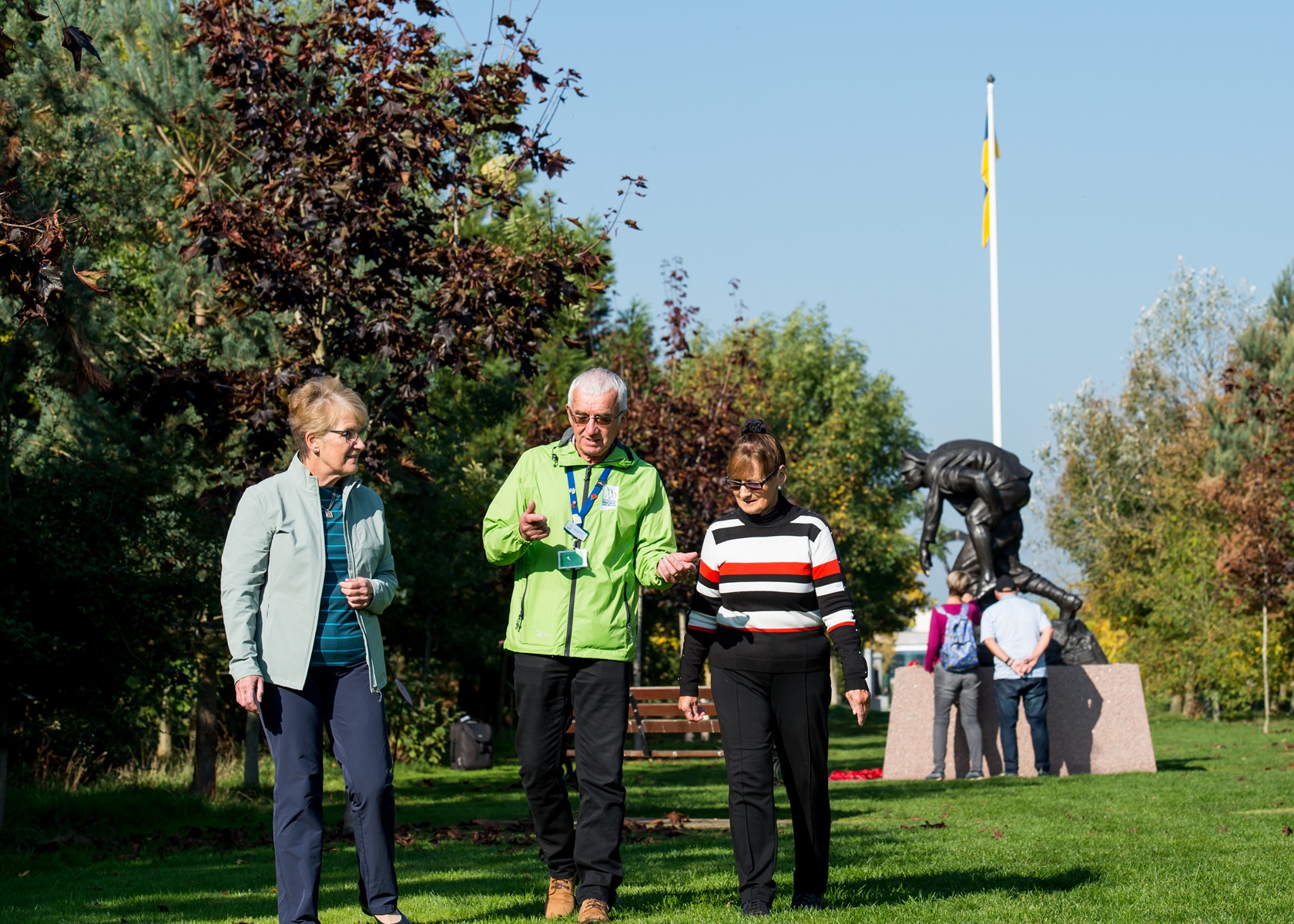 On 14 June 2022, the Royal British Legion will host a special commemorative event centred around the Armed Forces Memorial, to mark 40 years since the end of the conflict.  The commemorations will focus on the broad range of military and civilian involvement in all aspects of the Falklands campaign, which was unprecedented in modern times, and will feature veteran testimonies from key moments in the conflict as well as the Act of Remembrance.

The Falklands 40 Commemorative Event is open to veterans of the Falklands Conflict in receipt of the South Atlantic Medal, the bereaved family members of the 255 service personnel who lost their lives during the war, and civilians who supported the Task Force, such as the Merchant Navy and Dock Workers. All attendees are invited to bring one guest with them to the event.

Registration for the Falklands 40 commemorative event is essential, and is open until Friday 29 April 2022.

Next time you visit the Arboretum, you may wish to take a look at just some of our many memorials with links to the Falklands Conflict:

The South Atlantic Medal Association and the Antelope Garden

This memorial is a smaller version of the memorial at the Blue Beach Cemetery in San Carlos, where some of the British casualties are buried.

Flanking the main memorial tablet, there are six additional tablets engraved with the badges of the Armed Forces of the Task Force that recaptured the Islands after the Argentinian Invasion in 1982.

In April 1982, she set sail for the Falkland Islands in the South Atlantic to join the existing naval task force as part of Operation Corporate. The ship was badly damaged while patrolling in San Carlos Bay on 21 May 1982 and two of her crew were lost. 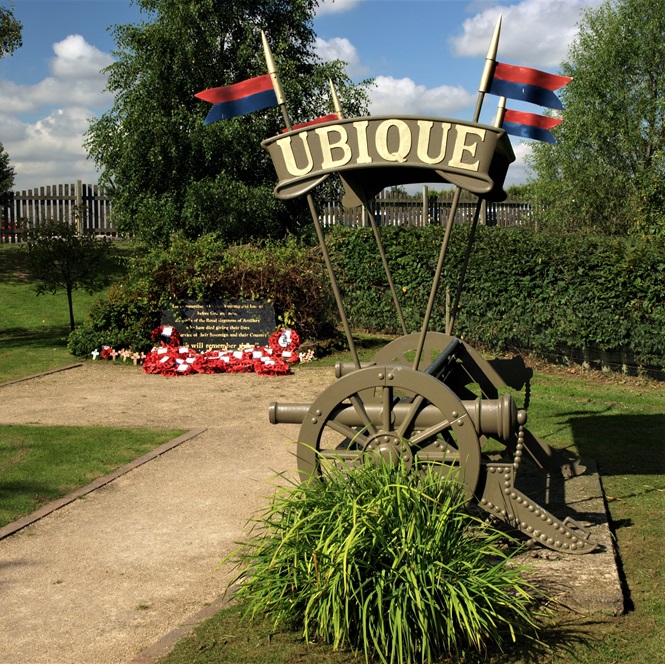 The Royal Artillery dates back to the 18th century, and by the end of the Second World War had become larger than the Royal Navy. The modern Royal Artillery uses a variety of equipment designed to fulfil a wide range of roles. During the 1982 Falklands Conflict they accompanied the Royal Marines, amongst others, providing much needed close support with their L118 Light Guns. 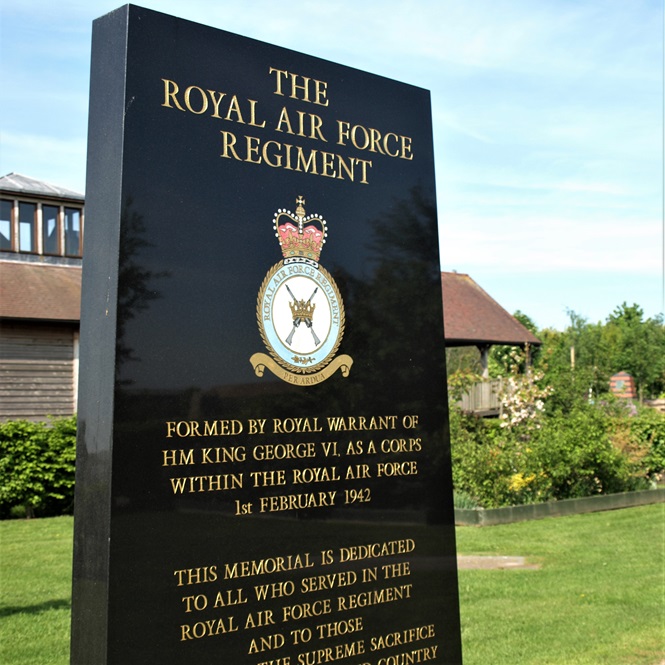 The Royal Air Force (RAF) Regiment provides specialist Force Protection for military airbases worldwide and is a unique Corps within the RAF.